How To Make People Buy: Do You Possess The Skill? 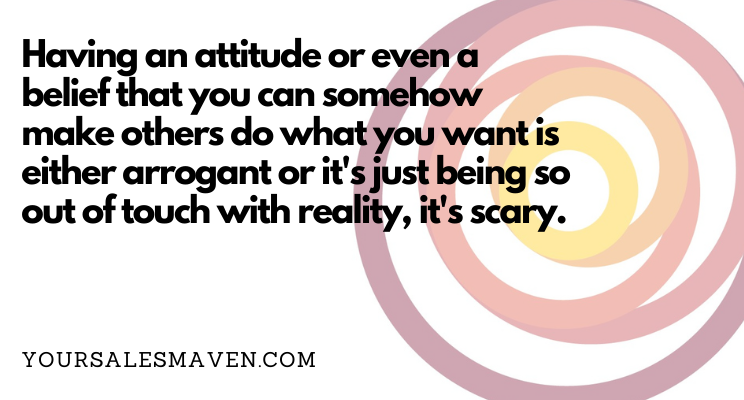 Do you possess the skill of how to make people buy?

In case you answered “no” to this question, do you wish you possessed the skill of how to make people buy? What would you be willing to do or pay for such skill?

The idea that in the selling process you can “make” people do anything is ludicrous. Mind control, manipulation, and forcing people to do something they don’t want to do isn’t the same as selling.

Think back to the last few purchases you’ve made, did the salesperson “make” you buy? Did you leave the interaction feeling forced? Please note, buyers remorse doesn’t equal being forced to buy.

How To Make People Buy

How would you feel if you were able to eavesdrop on the salesperson’s conversation with a co-worker (after you left) and they were boasting about how they “made” you buy?  Would you feel offended, outraged, or possibly decide you’d never do business with that person again? Chances are, if you heard someone bragging about making you do something, it would not feel good.

There has been more than one occasion when I’ve had to tell clients, “I can’t teach you how to make someone buy from you. If the prospect doesn’t have a need or want, there’s no making someone do something.” And, by the way, if I did possess some magical skill like this, don’t you think I’d be charging a whole lot more for my services. Teaching people how to be more effective in the sales conversation so that clients are more inclined to buy from you (when they have an actual need/want) is what people learn when working with me.

How To Make People Buy: Choice In Language Or Attitude?

It’s been interesting to observe how often people use this “make someone do something” language. Recently, I was asked to weigh-in on a question about the consultation process. There were quite a few people who suggested that the person asking the question should start “making” prospects do something in order to have a consultation with her. A few others shared how they “make” people do things in order to work with them.

As I sat back and watched these comments come in, it struck me how often people were using this word, “make”. Maybe it was just a poor choice of wording, or maybe, it’s a poor choice in attitude. Having an attitude or even a belief that you can somehow make others do what you want is either arrogant or it’s just being so out of touch with reality, it’s scary.

There’s a distinct difference between requesting (or asking) a prospective client to do something vs. making them do something. One sends the message of respect and the other sends the message of arrogance. Given the choice, when you’re the prospective client, would you rather work with someone that shows you respect or are you okay with hiring people who treat you as if you don’t really matter?

When you find yourself acting as if you make clients do something, it might be time for a reality check and a change to your language.

Wishing you continued success this week.