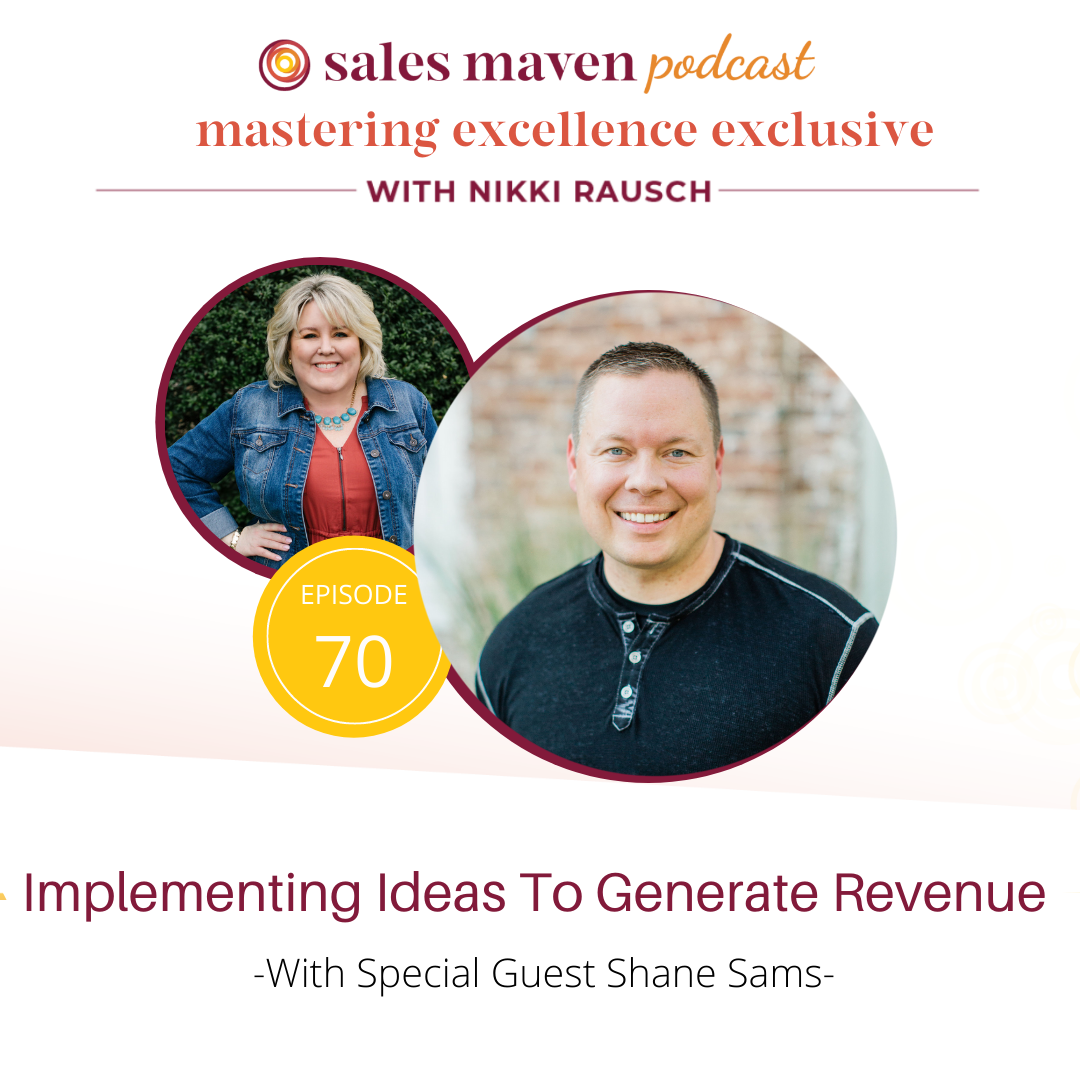 Today’s episode is a little different; it’s the first in a series Nikki is launching called Mastering Excellence.

Nikki’s guest today is Shane Sams, the host of The Flipped Lifestyle Podcast and the Founder of FlippedLifestyle.com. Listen as Nikki asks Shane some questions she pulled from an NLP modeling project to tap into Shane’s brain and talk about his process for mastering excellence by implementing ideas to generate revenue, plus much more on this episode of the Sales Maven Show.

Listen as Shane shares how he turns ideas into money and why he says until he can make someone vote with their wallet, it’s not a good idea; it’s just a plan. Before you spend a bunch of time and money on something, ask people if they would buy it.

Shane discusses how his team works and what each person does to keep the train rolling while leaving him with some unstructured time to sit down with a notepad to figure out new ideas to generate revenue.

“I’m not trying to get rich quick; I’m trying to get rich forever.” Shane discusses his goals when implementing ideas and why it’s not important to wait until you have a detailed sales page to get your idea out there. Shane shares how he knows he’s achieved his goal when implementing an idea to generate revenue. If one person buys it, then other people will also buy it. Shane also discusses the seven phases of building a membership site.

Shane shares when he knows it’s time to stop and move on to something else and who inspires him. He says that he and his wife celebrate big wins by moving on to the next big idea, but they also like to spend time in Mexico. Shane’s favorite sport is youth cheerleading, and when he was in high school, he always hung out with the nerds.

Shane is so inspiring, and he drops nuggets of brilliance through this entire episode, so believe me when I say you don’t want to miss one second of what Shane Sams shares.

[05:40] The topic they are talking about is Shane’s ability to have an idea and quickly turn it around and make money from it.

[06:42] Shane speaks about the idea and how he turned it into a course that has made hundreds of thousands of dollars.

[09:01] Shane says until he can make someone vote with their wallet, it’s not a good idea; it’s just a plan.

[10:37] Nikki asks, what would I have to do to think like you, have an idea, get someone to vote with their wallet and then turn around and make money off of it?

[13:43] You have to plan space at the beginning of the day; otherwise, your ideas will get bogged down under daily stuff.

[16:09] Shane speaks about his goal when he implements his ideas and how he starts at the end and moves forward.

[18:42] If the offer and product are good enough, it won’t matter if you have a detailed offer at first; just get it out there.

[21:05] How do you know you’ve achieved your goal when implementing an idea that generates revenue?

More on how to implement ideas to generate revenue…

[24:21] Shane shares the seven phases of building a membership site.

[30:02] When something feels overwhelming and exciting, that’s when he goes all-in on something.

[33:38] Shane talks about when he knows it’s time to stop and move on to something else.

[36:44] Shane speaks about working his way by networking instead of buying his way in.

[39:02] “The only way your next better opportunity will come is by you doing something.”

[46:38] How do you celebrate your wins? Shane says by moving on to the next big idea.

[48:34] People would be surprised to know that Shane’s favorite sport is youth cheerleading, and his favorite people to hang out with in high school were the nerds.

[50:55] The Live events are the most exciting things that are going on in his business right now.